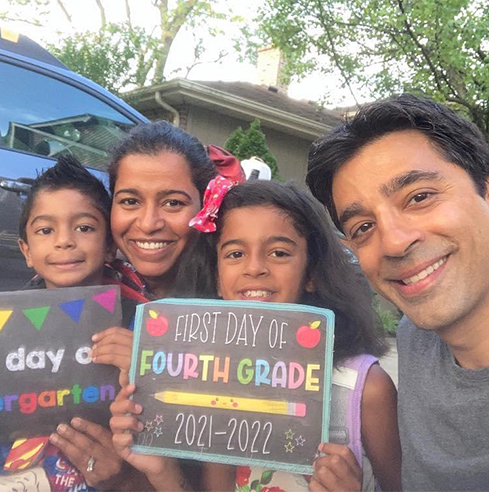 “With Bright Start, I’m Not Worried About the Cost of College”

Sagar Deo started saving for college before his kids were even born. Now, he’s able to focus on mentally preparing them for higher education without worrying as much about finances.

Long before he ever had children, Sagar Deo was already planning for their future. In fact, he was imagining what his hypothetical children might one day aspire to be before he was even dating anyone. While bored one day in his 20s, Sagar began researching investment planning and discovered the Bright Start 529 College Savings Plan. Intrigued by the idea of a savings account for higher education expenses, he reached out to Bright Start to learn more.

“After hearing about the plan, I calculated my chances of one day getting married and having kids, and I thought, ‘Should I just start saving now? I literally want to give my future kids a bright start,’” he remembers. “So, I opened it in my 20s because I had zero expenses. Now at 46, I’m thankful I did it.”

Today, Sagar and his wife Judy have two kids, Arielle (10) and Raul (6). Arielle dreams of one day working in a creative field like design, while Raul is holding out hope that he can be “a dinosaur or a racecar.” No matter what careers they choose, the Deo family feels ready to pay for college when the time comes thanks to Bright Start.

The Benefit of Starting Early

While Sagar’s strategy may seem extreme, his preparation has paid off. One benefit of saving early and often in a 529 college savings plan, like Bright Start, is the power of time. The longer your money is invested, the more your contributions and any potential investment gains have the potential to add up. With a Bright Start account, by saving on a regular schedule over time, you can build funds for your beneficiary’s future. For Sagar, seeing his savings add up solidified his decision to start saving early.

“I saw my Bright Start account growing and I thought, ‘This is crazy. They’re right,’” he says. “It’s the difference between knowing something theoretically like, ‘Hey, plan in advance, and it’ll be a good idea.’ But when you actually do that and you actually see it, it cements in your brain as, ‘Oh, that makes sense. It’s actually true.’” 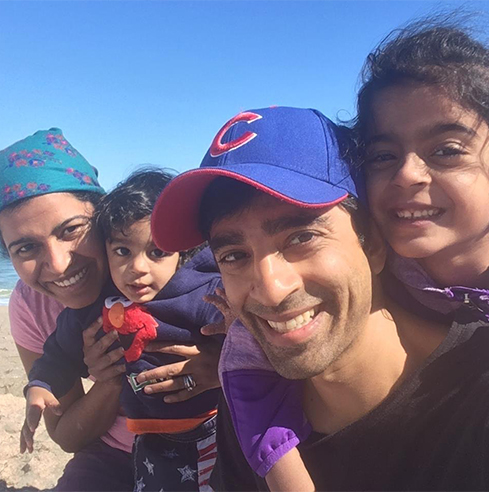 Think about saving for college while you have that time before your child is born. If it’s a month before, a week before — do it. No matter what.

Easy to Save and Modify As Your Life Changes

When Sagar first opened the account more than 20 years ago, he couldn’t have known how many children he would have or how his life would change. Bright Start makes it easy to update your savings strategies to adapt with your life transitions. With a variety of quality investment options, the ability to change your beneficiary at any time, and the power to contribute the amount that best fits your budget and goals, you’re in control of your savings every step of the way.

At 21-years-old, Sagar had fewer life expenses and saved in Bright Start’s most aggressive portfolio. As his children get closer to college, he’s saving in more conservative funds. He also uses the automatic contribution option, which invests a set amount of money into his kids’ accounts at regular intervals. While the amount of his automatic contribution has changed over time, Sagar says using this feature has made saving for college even easier.

“My dad told me, ‘Make good things automatic and bad things manual.’ His point being, make the things that are beneficial for you, like saving, as automatic as you can,” he says. “The automatic contributions reduce the friction and make it easy.”

Providing the Gift of Education

Over 20 years ago, the cost of college looked much different than it does today. According to U.S. News & World Report, from 2001-2021 the cost of in-state tuition has risen by 211%, out-of-state tuition by 171%, and private tuition by 144%1. When Sagar thinks about how much it’s increased, he’s grateful he started saving when he did. Without a Bright Start account, he wonders if his children would be able to pursue whatever their dreams may be, or if the cost of college would have limited them in their pursuits.

“When you plan to save, it allows your kids the power to choose; you’re allowing for less things to be removed from their choices,” he says. “So if a child says, ‘Oh, I want to be a doctor,’ or ‘I want to be an artist,’ if the money’s not there at all, there’s certain choices that just vanish because they cost a certain amount of money. Unless the child has a free ride or takes out loans, those things get negated. Saving for college gives them the chance to have a choice.”

Sagar sees his Bright Start account as more than just providing the gift of education down the road, it’s also providing lifelong financial lessons while his children are young. At just 10-years-old, Arielle already understands how her Bright Start accounts works, the cost of college, and why it’s important to save.

“If she learns how to read her statement, yeah, maybe her friends might find that ridiculous,” he says. “But when she’s 22, and she takes a finance class, she’ll have learned that so long ago that it’ll help her get up to speed so much quicker.”

Sagar admits his decision to save so early might be rare, but he also believes there’s a lot of other families who can learn from it — even if they don’t start saving two decades before they have kids. His advice: don’t wait.

“Think about saving for college while you have that time before your child is born,” he says. “If it’s a month before, a week before — do it. No matter what. That’s what we did, and now I can focus on our family and making sure they’re prepped for school instead of how we’ll pay for it.”

The Bright Start Direct-Sold College Savings Program is sponsored by the State of Illinois and administered by the Illinois State Treasurer, as Trustee. Union Bank & Trust Company serves as Program Manager. Balances in your Bright Start account are not guaranteed or insured by Bright Start, the State of Illinois, the Illinois State Treasurer, any other state or federal agency, Union Bank & Trust Company or any of its affiliates, the Federal Deposit Insurance Corporation (except as provided in the Program Disclosure Statement solely with respect to the FDIC-insured Bank Savings Underlying Investment), or any other entity.