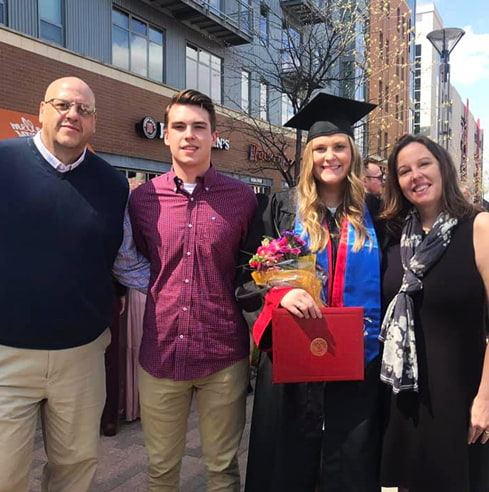 “It’s Almost Like College Was on Sale; Who Doesn’t Love A Sale?”

By saving $100 per month, the McClurg family was able to save a large portion of their kids’ college costs.

Before their children were born, Jeff and Kathryn McClurg already had plans to save for their kids’ college educations. But they weren’t sure where to start. When their daughter was born in 1997, Kathryn started seeing ads on TV for college savings accounts and felt compelled to learn more. After exploring several college savings options, the McClurgs chose to invest in Bright Start 529 College Savings Plans.

Now, Elizabeth, 22, has her degree in supply chain management from the University of Nebraska-Lincoln and is working as an inventory control analyst for Uline, a shipping and business supplies company. Her brother, Cole, is a sophomore at UNL studying turfgrass and landscape management with goals of becoming a golf course superintendent. Elizabeth was able to graduate with minimal debt, thanks in large part to her Bright Start savings, which were supplemented with scholarships, small loans, and student jobs. And now Cole is on track to do the same.

Kathryn found several possibilities as she searched for the right college savings options for her family. However, after comparing them all, Kathryn says Bright Start stood out by making it easy to get into the right investments for her family. Bright Start offers multiple investment options to meet the needs of any family, including age-based, target, and individual fund portfolios. And with the ability to set up automatic contributions, similar to a 401(k), Kathryn could watch their money grow without extra effort. “We chose the age-based portfolio that gets more conservative when your kids get older,” Kathryn says. “We could set it and I didn’t have to worry about it again. When I wanted to, I could easily look up the accounts online and see the investments and growth.”

I’m such an advocate. When someone has a baby, I tell them to start with Bright Start. It totally saved us. We are a living example of the success of Bright Start.

It Pays to Save Early and Often

Before their children could walk, the McClurgs had a Bright Start account for each of them. By investing early, their money had time to grow with the stock market. They say it was a small step toward their children’s future. “We started with automatically putting in $100 once a month from our paychecks,” Kathryn says. “When Cole was born, his $100 came out on the 15th and Elizabeth’s $100 came out on the first, so it was easy to manage that way.” At the time, Kathryn says she had no way of knowing what the costs of college might be; but she says it was worth saving, even if it would only cover one semester. “It made the kids feel more at ease that we have been saving for almost 20 years,” she says. “It gave them peace of mind that we were expecting this and had a nest egg for them.”

“By taking the money out when we got paid, it was kind of invisible,” Kathryn says. “After five years, we were able to turn it up to $200 per month and it didn’t hurt the budget.” Bright Start allows families to easily update their automatic monthly contributions to align with their savings strategies. Kathryn says this was extremely important for her family as they began to realize just how much college costs were rising. “When we first started, I thought we could have $10-12,000 in the bank,” she says. “When they got to high school, I started seeing that college could be $50,000 a year, and so we started turning their contributions up a little more.” By the time their children started college, the McClurg family had nearly $50,000 saved in each of their student’s accounts thanks to their initial investments and market growth. Those funds, supplemented with scholarships, student jobs, and relatively small loans, helped minimize the children’s debt coming out of college. “Bright Start made college more attainable,” Kathryn says. “When we went to each school with Elizabeth and Cole, I could think in the back of my mind, ‘okay, this is the total cost, subtract the $50,000 off, divide it by four, how much can we afford per year?’ And that made things easier. It’s almost like college was on sale because we saved this money that was almost invisible to save. Who doesn’t love a sale?” By starting early, choosing the right investments, and managing her contributions over time, Kathryn says she was able to easily navigate rising college costs. In fact, Kathryn says Bright Start has given her kids financial freedom and has pushed Elizabeth toward her next life goal.

“It’s given Elizabeth a greater sense of responsibility,” Kathryn says. “She’s already looking at her master’s degree, and if her loan was twice as much, it would have deterred her. Our Bright Start account has reduced all of our stress about how we were going to pay for college and is preventing both of them from graduating with crippling debt.”

The Bright Start Direct-Sold College Savings Program is sponsored by the State of Illinois and administered by the Illinois State Treasurer, as Trustee. Union Bank & Trust Company serves as Program Manager. Balances in your Bright Start account are not guaranteed or insured by Bright Start, the State of Illinois, the Illinois State Treasurer, any other state or federal agency, Union Bank & Trust Company or any of its affiliates, the Federal Deposit Insurance Corporation (except as provided in the Program Disclosure Statement solely with respect to the FDIC-insured bank deposit Underlying Investment), or any other entity.