Save For College Now to Avoid Borrowing Later

Graduating college is one of the proudest moments in a person’s life. It’s the chance at a new career, a fresh start, and the first step toward independence. At least, that’s the dream students are aiming for. But today’s graduates often have debt holding them back.

According to data from Scholarship America1, the average student debt as of 2021 is nearly $30,000. Their research found that students who owe at least that much settle for lower-paying jobs so they can start loan payments right away. They also have worse credit scores, are less likely to take out car loans, and are 36 percent less likely to purchase a house.

“It really hinders their ability to move on and set up their post-college life,” says Michelle Trame, financial aid director at the University of Illinois Urbana-Champaign2.

Understanding the long-term financial impact of borrowing versus saving can be life changing. In the long run, saving for college as early in a child’s life as possible can be less expensive than borrowing. Families need to consider how every dollar stacks up and how the power of compound interest can work for or against them.

Make Interest Work for You

You’ve likely heard that every dollar saved is a dollar you don’t have to borrow. Actually, a dollar saved could be worth more than a dollar over time when you account for any potential investment gains. If you saved just $25 per week for 18 years in a 529 college savings account, you would invest a total of $23,400. If your investments hypothetically earned 6% growth per year, your savings would have the potential to grow to $42,000 to spend on future tuition and college costs. In contrast, when you factor in the cost of interest on student loans, repaying $42,000 you borrowed for school could cost you $53,000 or more in your first 10 years out of school. That adds up to a monthly payment of $445 every month for 10 years.3 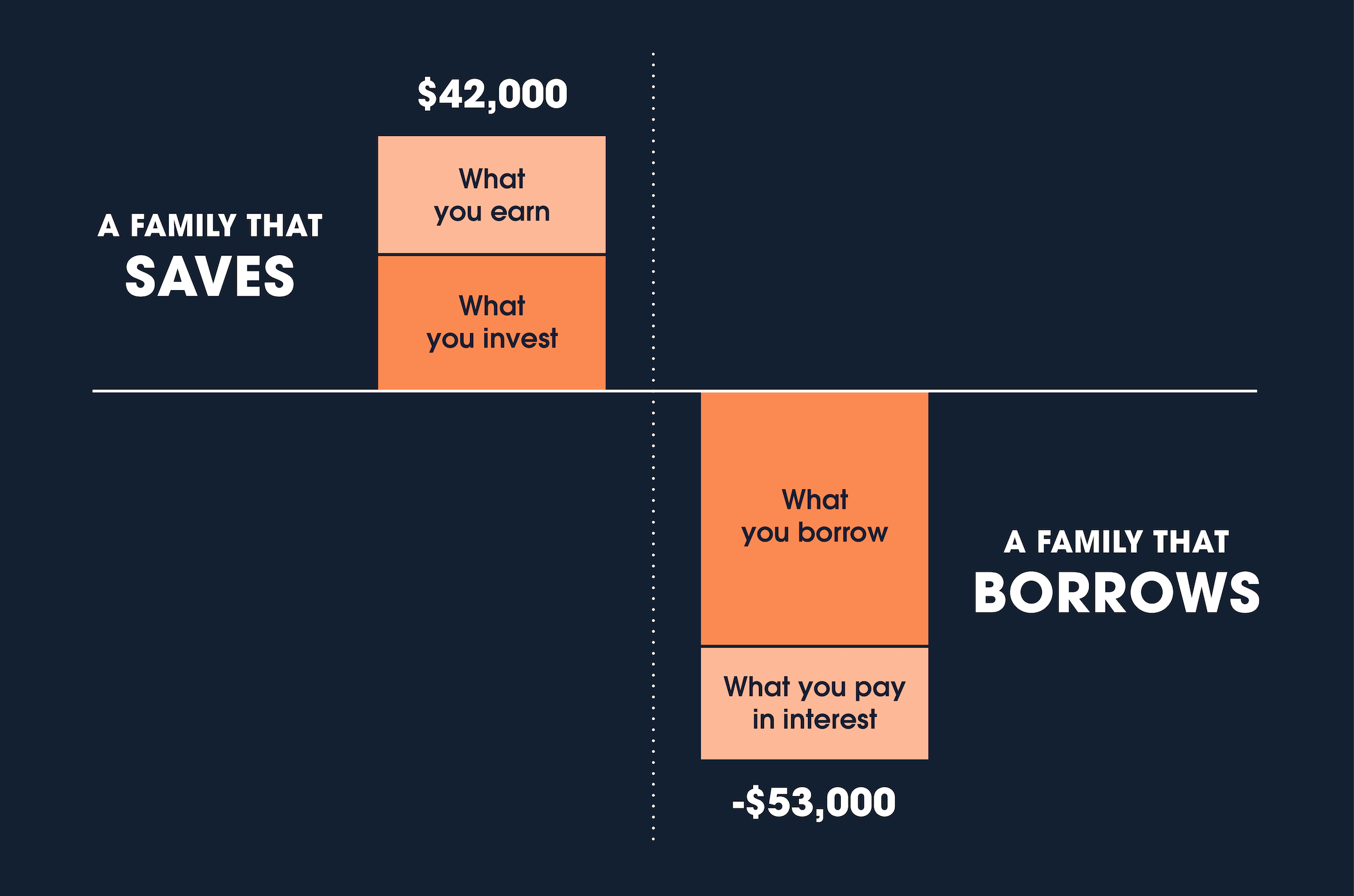 This hypothetical illustration assumes an average annual return of 6% for the savings, and a 5% interest rate and 10 year repayment period for the loan. The illustration doesn’t represent any particular investment nor does it account for inflation.

By saving for college with a 529 plan, the potential interest can possibly work for you. For instance, with a Bright Start 529 College Savings account, families can take advantage of tax-deferred compounding of any dividends, or potential interest or gains while in the plan — providing the opportunity for growth over time. On the flip side, when you borrow for college using loans, the interest can work against you and significantly increase debt over time — making that dollar you could have saved turn into a dollar plus change that you now owe.

“It can be really difficult for a graduate to be managing loan payments at the same time they’re starting off with building their lives,” Trame says. “Having the savings to be able to limit borrowing to the extent possible is definitely beneficial.”

Decades ago, before college costs began to skyrocket, a student could work during the summer, have a part-time job during school, and reasonably expect to pay for college. But that’s just not the case anymore, according to Trame. She suggests families be realistic about the current cost of college and start a savings plan when their child is young.

“Even if you’re just putting away $20 a week or a month, anything helps,” she says. “Honestly, the younger you start, the better. Even as young as preschool. And I know a lot of parents aren’t thinking about it at that time, but the longer you do it, the less they have to borrow later.”

Maureen Amos, director of financial aid, scholarships and student employment at Northeastern Illinois University, agrees that every dollar makes a difference. She adds that saving for college doesn’t have to be an all or nothing approach, and for many families, savings will be a complement to other funding sources.

“If you can only save for some of your tuition, that’s still better than nothing,” Amos says. “Saving could be in the form of putting money aside in an official, organized type of plan and it should coincide with securing scholarship opportunities. You have to think of it all as an investment in you.”

If You Have to Borrow, Do It Wisely

A 2018 study by NerdWallet4 found the average college graduate will need to work until age 72 due to high student debt, more than a decade older than their grandparents — and that’s if they are diligent about budgeting. The study also found that students with large loan debt have to sacrifice saving for their retirement, in some cases setting them back hundreds of thousands of dollars in lost earnings.

Amos and Trame have seen this situation play out with graduates. It’s why they advise that if students need to borrow for college, they should try to minimize the impact.

“You want to only borrow what you need,” Amos says. “The goal is to make sure your direct or billable costs are met, like tuition and fees. Keep the borrowing as low as possible, particularly for the first degree.”

Families should also take time to understand the terms of the loans and pay attention to who they’re borrowing from. Federal loans made available through the FAFSA generally have lower interest rates and may be easier to pay off than private loans.

“We would discourage students from utilizing private loans that have high interest rates,” Trame says. “Federal loans have multiple repayment options that are available to students, and private loans don’t have that flexibility.”

By saving smarter for college, students can breathe a sigh of relief on graduation day knowing a significant portion of their first paycheck isn’t going to loans. And parents can have a sense of pride that their student is becoming more independent.

The first step to saving is researching your options. Visit Bright Start’s College Savings U to learn more.

1The Far-Reaching Impact of the Student Debt Crisis

2Michelle Trame and the University of Illinois encourage families to research all savings plan options. UIUC does not endorse any plans.

3This hypothetical illustration assumes an average annual return of 6% for the savings, a 5% interest rate and 10 year repayment period for the loan. It doesn’t represent a specific investment, nor does it account for inflation.

The Bright Start Direct-Sold College Savings Program is sponsored by the State of Illinois and administered by the Illinois State Treasurer, as Trustee. Union Bank & Trust Company serves as Program Manager. Balances in your Bright Start account are not guaranteed or insured by Bright Start, the State of Illinois, the Illinois State Treasurer, any other state or federal agency, Union Bank & Trust Company or any of its affiliates, the Federal Deposit Insurance Corporation (except as provided in the Program Disclosure Statement solely with respect to the FDIC-insured bank deposit Underlying Investment), or any other entity.